Conducting research with BMAC for my thesis has given me quite a bit of perspective on primate conservation and creating awareness on behalf of endangered primates. Awareness programs provide information to the public so we can all make better informed decisions in our daily lives regarding the wildlife we share our world with. I did this previously for the Alabama Wildlife Center and Ruffner Mountain Nature Center so educating the public about wildlife wasn’t a completely foreign idea to me. Yet, here I am with two different experiences in two very different parts of the world. However, both experiences have left me with a sense of the many ways in which we humans interact with wildlife and how our perceptions are shaped by our experiences. While here in Alabama you are not likely to see a monkey on a regular basis like the shepherds in Morocco, you do often see monkeys and other primates in the media and in live shows. And this brings me to a situation I encountered last week here in Birmingham.

Friday night my husband sent me a message saying, “You should have a look at this.” (Knowing I would not be happy about it.) It was a Facebook post by a sponsor of a local event and featured a picture of a small monkey dressed as a cowboy riding a dog. I was horrified. Knowing what I do about primates I couldn’t possibly sit by and do nothing. The post was inviting people to come out and see this duo entertain the swarming crowds. Myself and a few others expressed our concern for this ‘act’ on their FB page, explaining the many reasons this wasn’t such a good idea. Here I will tell you what I said on both the sponsor and venue’s FB pages and why these issues are so important. (Lucy has gone over many of these already on the BMAC website, but for the sake of continuity I will briefly recap.)

1) All primates need to interact with their own species to maintain proper psychological wellbeing. Meeting their basic physical needs alone is not adequate.

2) Also, in regard to physical/material needs, primates require specialized foods and housing that are often costly and difficult for individual pet owners to provide.

3) Using monkeys in the media, live entertainment, and photo props encourages people to buy pet monkeys and many are still poached from the wild for this reason. (In the case of poaching, members of the troop are often killed when poachers go after an infant – the preferred target. Then, life as a pet usually doesn’t end well. Typically the animal lives a life of misery with improper diet and lack of social stimulation. The human is often injured by the animal and ultimately turns it over to a shelter or sanctuary – if it is lucky.)

3) Researchers have shown that the use of primates by the media and for ‘entertainment’ creates a false sense of their status in the wild. By this I mean the public tends to not see the need for primate conservation after seeing monkeys and apes out of context.

4) Diseases are easily transmitted between primates and humans – in both directions. Pets, live entertainment, and photo prop scenarios create an environment for such disease transfer.

Now you have a general run down of why I spoke up about this live show. Getting back to the comments, the sponsor responded very politely, and assuming I was simply concerned for the general welfare of this animal, informed me that the monkey was well taken care of. The venue responsible for bringing this act to town also responded that the monkey had not come into contact with anyone per the request of the gentleman handling it. While I appreciated their concern for my comments, I also got a sense they were not getting the entire picture. It’s not that just one of the issues is bad, but rather they are all collectively bad. But even more shocking were the giddy people posting comments on their FB pages in support of this show. Ok, I get it. Primate conservation is not something everyone takes seriously or has even given a fleeting thought – which leads me to my next topic: our culture of constantly seeing primates in the public spotlight. 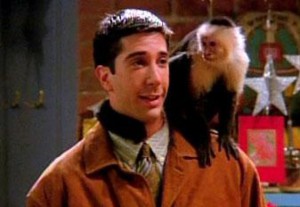 Ross and ‘Marcel’ from Friends. Image from http://friends.wikia.com/wiki/Marcel

Our current situation is a result of normalization of primates in the media and other forms of entertainment. Primates often appear out of the context of their native habitats and depicted interacting with humans in ways that are unnatural for a wild animal. Everyone remembers Clyde the Orangutan from Every Which Way But Loose or Marcel the Capuchin of Friends fame. And what about Dexter the Capuchin from Night at the Museum? We have such a fascination with wildlife, and especially primates because we share so many similarities with them. As a result, it is often hard for many people to grasp just how desensitized we are to images misrepresenting these animals. We love monkeys and apes, but we are loving them to death. Almost 50% of all primates are now endangered and by disregarding the looming dangers of primates in media and live entertainment we are supporting their further decline into oblivion. And I’m not making this up to be dramatic. There have been numerous peer-reviewed publications attesting to this.

By speaking out and letting businesses know this is not responsible behavior we can eliminate the misery of the monkeys used in both live and filmed entertainment while also slowing, or even halting, the demand for primates as pets. At the same time, we also insure our world is a healthier place since numerous modern diseases have arisen from viruses crossing over from animals to humans. While this may be rare, there is still very little known about how new diseases emerge. So better to play it safe. And finally, building awareness also supports wild primates that are desperately in need of help. If you’re wondering why bother with any endangered wildlife, then let me refer you to a recent article that does a great job explaining why worldwide biodiversity is important to everyone, even those of us here in Alabama: http://www.bbc.com/earth/story/20150715-why-save-an-endangered-species?ocid=twert

Candidate for Master’s in Anthropology, University of Alabama at Birmingham