A part of the work of BMAC is the rescue and rehabilitation of Barbary macaques.

On June 15th 2014 we were alerted by a forestry official to the presence of a macaque abandoned on a busy main road. Ahmed and Kenza rescued the macaque who was a ~2-year old female and took her back to the only accommodation we have available which is our office in Tetouan. The macaque was very thirsty and hungry and still had a large collar and chain around her neck which we removed (it left a bald area around her throat as it was becoming too tight). We are used to keeping confiscated macaques for a few days as travel papers are prepared for the journey to the Rabat Zoo. 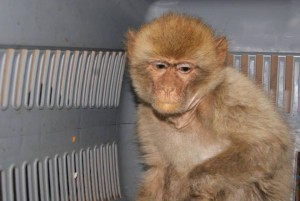 Unfortunately and unsurprisingly the zoo is now over capacity with Barbary macaques and it would be bad for the welfare of their existing group to try and include more. We were not sure if the macaque would be a good candidate for release into the wild but we were left with little option after she had been living in our office for more than a week. The situation was not good for her or for us. We made the decision to try to integrate her into a wild group and on Friday Ahmed and Kenza took her to a very remote part of the forest in Bouhachem.

Whilst Ahmed tried to locate the wild group we know lives in that part of the forest, Kenza monitored the little female’s behaviour. It was a great relief to see her behave very normally and not show fear of her surroundings. Even better was her reaction when she heard the wild group coming close. She ran towards the group without a backward glance at Kenza. 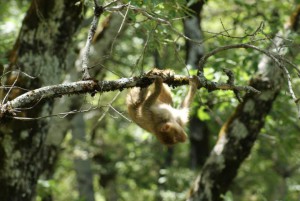 We knew when she had made contact with the wild macaques as we heard some calls of greeting and then silence – no sounds of aggression or fighting. 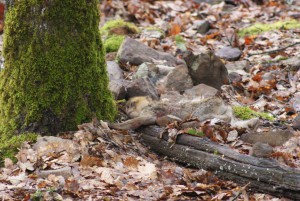 Starting to realise she has to get off the ground. The BMAC team are keeping watch over her but don’t want to frighten her further by getting too close.

This female was attacked by 4 dogs in february 2014. Luckily the BMAC team were trying to send the dogs off away from the group and were able to intervene and save the macaque’s life. She was very shocked and had a lot of wounds but as the minutes pass, she begins to regain some strength and manages to actually climb to safety.

At this point the BMAC team withdraw as her group begin to return and she is joined in the tree by another macaque (probably a female relative). This is distressing but as Mohamed and I told Ahmed yesterday Barbary macaques are resilient and she has a good chance of survival now. In 2009, a male macaque was attacked by ~ 12 dogs and saved by a crew who were repairing the road through the forest. We saw this male after the attack and he had awful injuries but he survived and is now a big adult male. 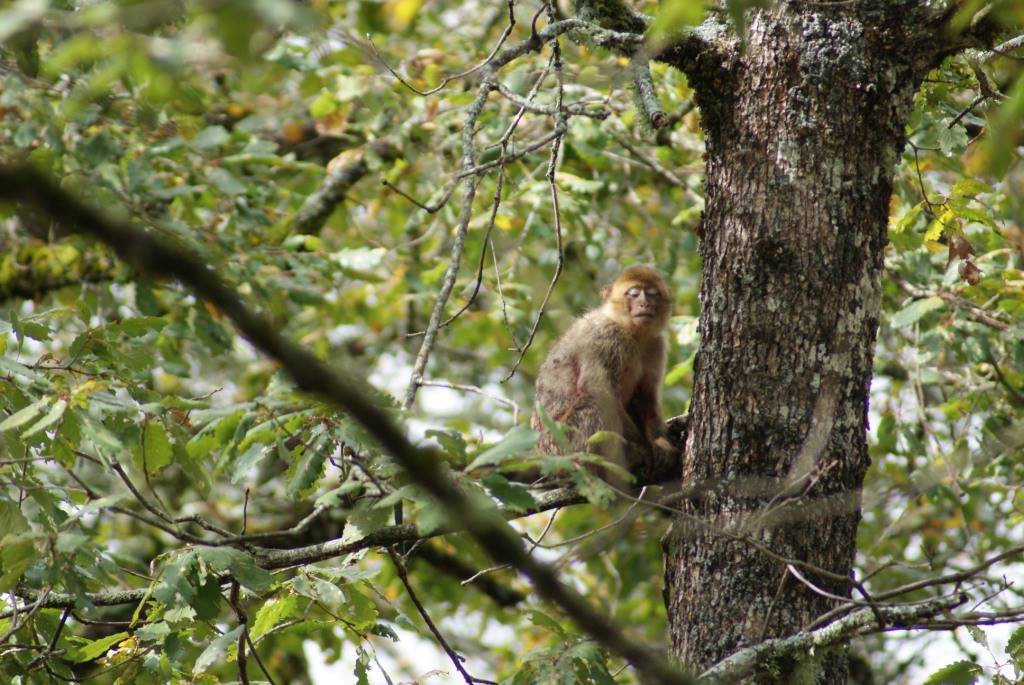 Finally safe but exhausted in the tree with group members returning to join her.

Rescue and rehabilitation of the monkey Tehsta

In 2012, four infants were captured from one of the study groups of the Barbary Macaque Project in the Ifrane National Park in the Middle Atlas. A number of NGOs, including BMAC, were involved in trying to locate these infants.

About three weeks after the infants were reported missing, two female infant macaques, on their way to Spain, were confiscated by customs officials at the port in Tangier and DREFCLD were informed. BMAC director Ahmed El Harrad collected them from Tangier, and immediately gave them food and water and transferred them from the cardboard box where they had spent at least 24 hours to a slightly more suitable crate. Ahmed El Harrad travelled to Azrou, making contact with the park officials and with the students working for the Barbary Macaque Project. A few days into the integration, the students called Ahmed and told him it had been decided by others to send the infant to the Rabat Zoo. We advised patience as, in our experience, it sometimes takes some time for Barbary macaque infants to readjust to wild conditions. As we expected, Teshta acclimatised enough to be released from the howdy cage a few days later. 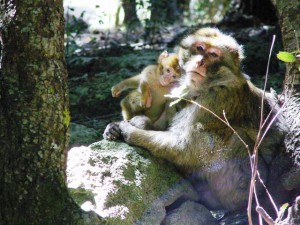 Teshta happily in the wild again with an adult male. Photograph by Barbora Kubenová

Until we have built our centre in Bouhachem we will be forced to keep macaques in the inappropriate environment of our office. If you would like that situation to change then please consider making a donation however small to our funding campaign