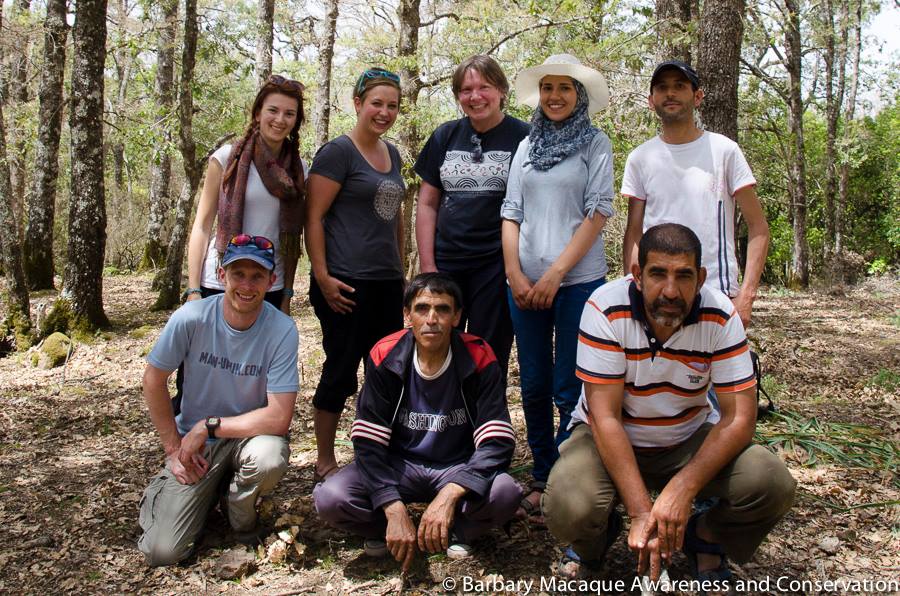 Hi everyone ☺ I’m Rosie, and I’ve worked at Folly Farm Adventure Park and Zoo near Tenby in Pembrokeshire, South Wales for the last 3 and a half years. I am the zoo’s Primate Keeper and Zoo Supervisor, and I am lucky enough to work with three Barbary Macaques, who are ex-pets which were rescued in Europe by the Dutch primate sanctuary AAP.

Folly Farm have supported the work of BMAC for several years now, regularly donating to the charity following fundraising at the park, and we also sponsor the BMAC football tournaments for village school children. Loving the macaques as much as I do, I ‘encouraged’ three work-mates to run a 10k with me to raise £1000 for the charity in 2014 – and following this, my boyfriend secretly organised a trip for me to visit the team out in Tétouan, and visit the forests of Bouhachem to see wild Barbary macaques for the first time. When I was finally let in on the secret for my Christmas present, I was thrilled – and then it was only five long, excitable months to wait…

Now that I am home safely and back at work in a slightly grey Pembrokeshire, I have been asked to write an account of the three amazing, sunshine-filled days I spent with BMAC in Morocco. Hopefully I can help to explain how important the work that they are doing is. 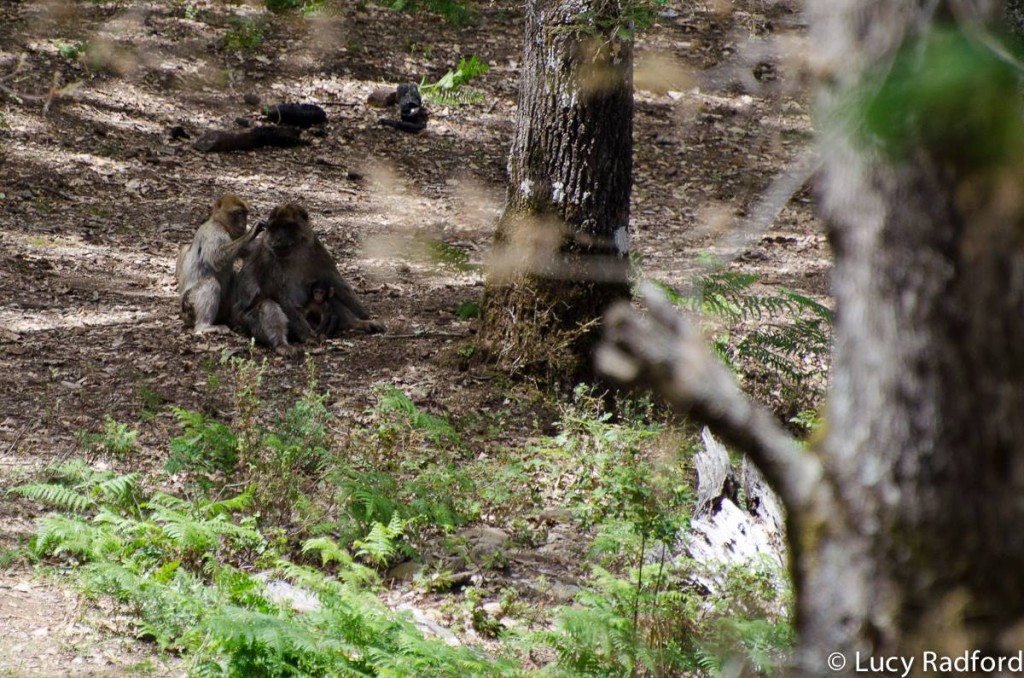 We arrived late in the evening and were kindly picked up from Tangier airport by Sian, Lucy, Ahmed and Kenza, before heading back to Tétouan to get a good night’s sleep. Our first taste of BMAC life was the following day, hearing Kenza deliver an excellent presentation at the Tétouan British Centre. The talk explained the surveying work that the team have completed across macaque territories in the Tangier-Tétouan region, as well as ongoing studies in Talessemtane National Park. It was well received by the students, and it was great to see one of the many sides to this in-situ conservation – not just on the ground in the forests, but trying to positively change attitudes towards the macaques in different groups of local people.

The next day we headed into Bouhachem forest, and I began to get an idea of the habitat wild macaques inhabit – particularly what they like to eat! It was interesting to see the oak trees that are being plagued by caterpillars, which in turn are enthusiastically eaten up by the macaques! At around noon, we saw the ‘Teshta’ group passing through the Doradlahcen area of the forest –I will never forget that moment! It was quite emotional to see them living so happily in such peaceful surroundings. Later we saw the ‘Bigs’ group by the beautiful flower-filled pond called Afretzambo, where juveniles like to play in the water and there is a plentiful supply of food in the forest leaf-litter around the pond itself. The males were happily showing off the group’s babies to each other and it was lovely to see them grooming and playing together ☺ 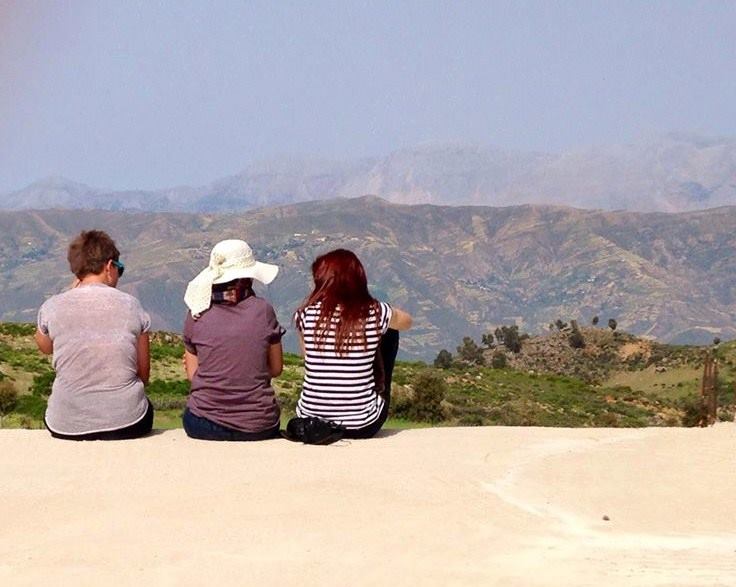 We then visited the site of the unfinished conservation and education centre, and we sat on the roof in the sunshine and admired the incredible views of the surrounding mountains and forest. Completing this project will be vital to raising awareness amongst local people about the plight of the Barbary macaque and the negative impact that the pet trade has on individual animals as well as the whole species.

On our third day, I was excited to hear that we would be spectators at the final of the village schools’ football tournament in Moulay Abdesselam – particularly as the competing boys would be wearing their BMAC and Folly Farm sponsored t-shirts! These games encourage positive attitudes towards the macaques by the boys growing up near their habitat. It is through Folly Farm’s support for this initiative that I first heard about BMAC, so I really wanted to see it in action. I did not expect though to have to test my limited football skills by kicking off the final! I managed to cover myself in glory by punting the ball a whole metre, and the game continued to finish with a dramatic penalty shoot-out. I was honoured to present the eventual winners with their hard-earned trophy. Some of these boys may go to become shepherds working in the forest, alongside the macaques, so it is vital to spread the positive message from an early age. BMAC have also reached out to the adult shepherds and built trust with them – changing the common negative attitudes towards the monkeys, and discouraging their persecution and killing. I really hope the tournaments continue to be so successful and enjoyed by the boys – it was lovely (and slightly surreal!) to see them wearing their Folly Farm t-shirts, and having so much fun in the sunshine. 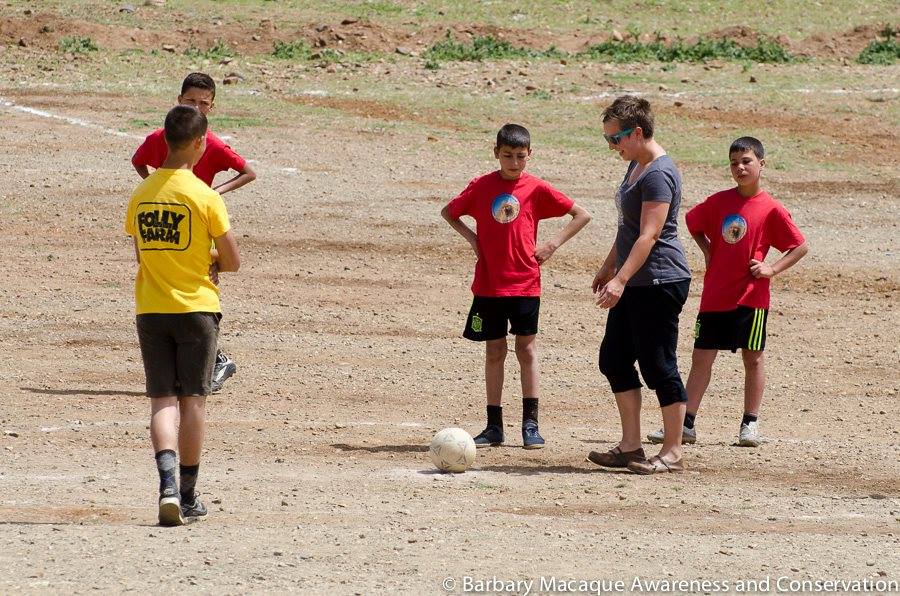 So then it was time to sadly leave the BMAC team, and head onto Chefchaouen and Tangier for a few days of sightseeing away from the forest and the monkeys… I had an unforgettable time with the whole team, and cannot thank them enough for putting up with us and all of our questions! As a Barbary macaque keeper here in the UK, it was so informative to be able to see the natural behaviour of the monkeys in the wild and how they forage and interact with each other. There are many husbandry ideas that I can apply to the group at Folly Farm – particularly lots of new foods that I could offer and new enrichment ideas. However as the three individuals I look after are ex-pets, they may have different preferences to their wild-living cousins and these ideas may not go down so well…! However I am definitely going to try them out – it will certainly be a change if nothing else!

Finally I must say again how privileged I felt to be able to visit Bouhachem, and see these truly wild Barbary macaques. With estimates of between only 8,000 and 10,000 individuals remaining in the wild, it’s so important to support the work of BMAC in monitoring these populations and educating local people. I truly loved my time in Morocco meeting some inspirational people, and I was honoured to be asked to become an ambassador for the charity during my trip. Now I feel even more encouraged to raise both money and awareness for this important species that is so dear to my heart, hand-in-hand with Folly Farm’s continued support. My first challenge is to tackle a possible online outlet for macaque related products, as well as spreading the word about the amazing group adoptions, and the Amazon wish-list – particularly as I have seen how important the equipment is to the team out in the forest on the frontline of in-situ conservation. 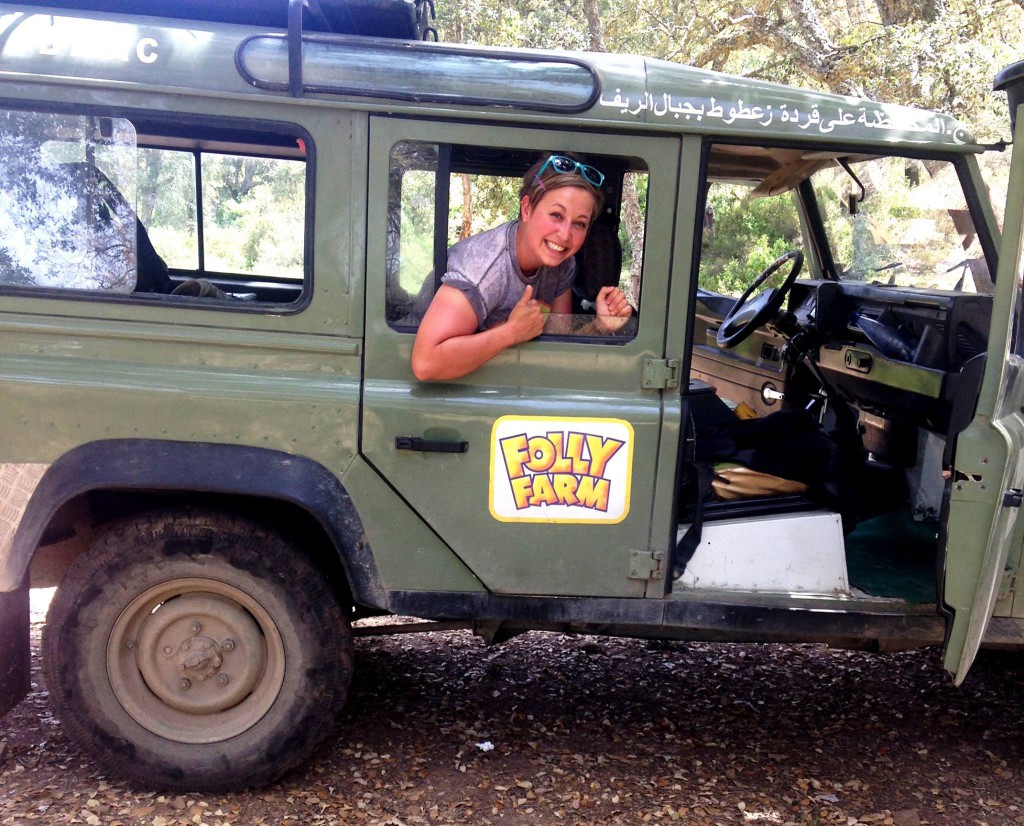 Thank you if you have made it this far! I hope you agree with me that the BMAC team deserve all of our continued support with their work. Diolch, Rosie x